The Cape Independence movement has a brand problem

Without a strong identity, the Cape Independence movement will fizzle out like the Volkstaat 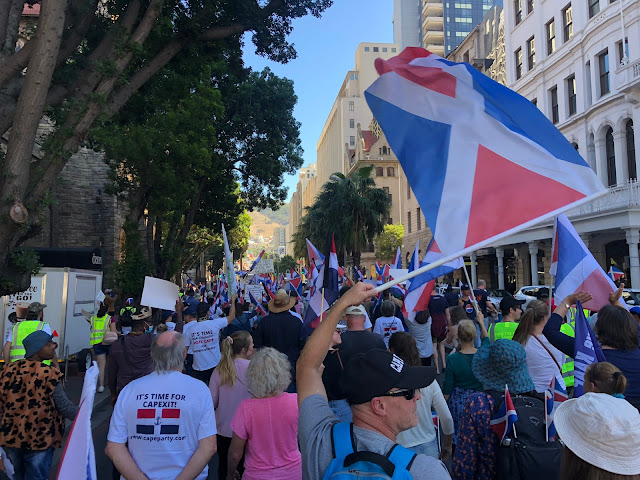 I saw on Twitter that the Cape Independence movement held a March on 27 April - Freedom Day - and decided to ask some of the participants/organisers to explain the brand to me. I felt it is a dead horse, which is quite disappointing since I'm told the South African constitution actually provides a clear route for such an outcome - if it can garner enough support!
The brand problem starts with a self-confidence issue. I sense many supporters believe the rest of South Africa is against them becoming independent when the reality is likely very different. The project in South Africa is mainly to align itself with the rest of Africa. The focus is North, not South. There's nothing as fatal as a brand that thinks it is up against a specific competitor when it's not. I often get this working with small businesses that automatically think they are up against the large established brands in their industry when customers simply don't care about them.
Along these lines, as per the below statement, Cape Independence really depends on the desires of another province with far more legitimate claims to being a nation, Kwazulu Natal.

And here's a relatively recent overview of the population breakdown of the provinces in question. Most of the 11 million in KZN belong to the Zulu nation, which may as well be a country. The Western Cape has much less leg to stand on with its hotchpotch of cultures.

But back to the brand. The data don't add up. On the one hand, I am told 40% in the Western Cape support independence...

On the other hand, they only had a thousand people at their march - many leaving when the day warmed up. 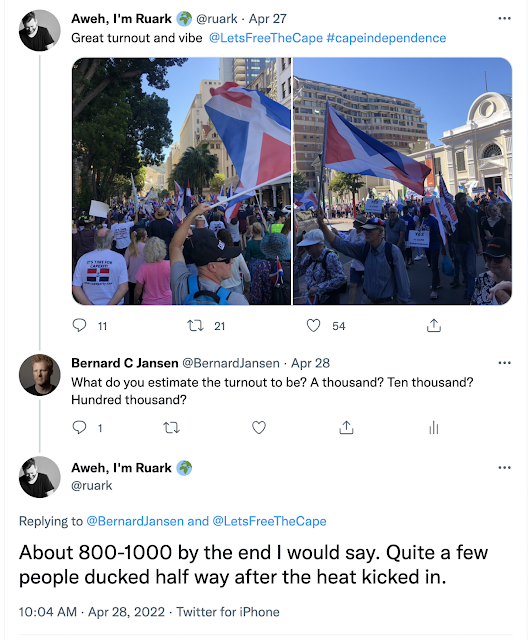 The other even more significant issue is the undercurrent of racism that raises its head. Here the joke is the fake eyebrows of the apparently black female ANC supporters that attended the recent march - a group that should be embraced should they want any chance of success. 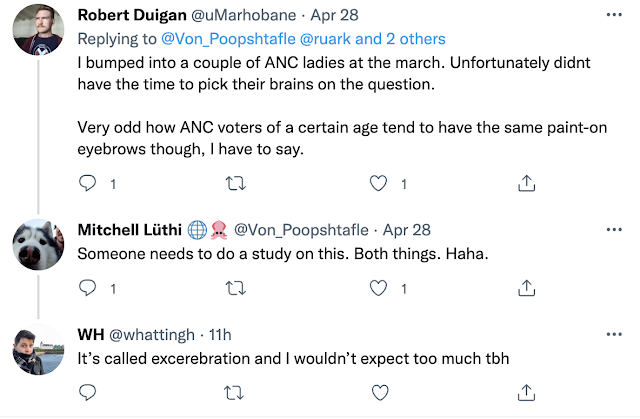 And, to top it off, the brand positioning seems to be on the back of South Africa's failure instead of the Cape's ability to succeed. Such a "versus" positioning asks people to run away from something negative instead of towards something positive.  The below interaction shows what I mean: 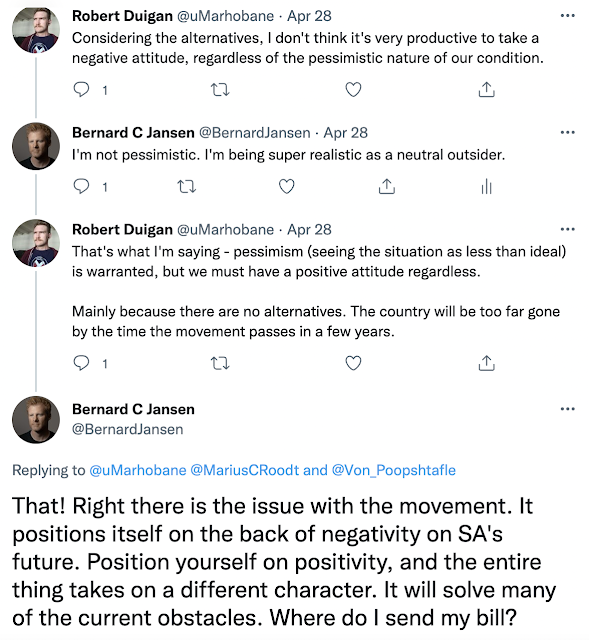 My conclusion from these admittedly limited interactions with some of the movement's organisers/members is that the Cape Independence movement should not be taken seriously just yet. It's a bit like the Volkstaat that never happened.
You see, you build organisations like this on a shared identity that wants - that deserves - to govern itself. For the campaign to succeed, it needs to find that shared thing that all people in the Cape already have - the province's identity, and this cannot be "oh well, we all hate South Africa". True identity is based on deep connections within itself, not against something else.

Popular posts from this blog

- July 05, 2020
You only win in rugby if you're willing to make the tackles. Sure, the attractive part of the sport is the slick backline moves that result in a clean break and a trie, but although this is how you put points on the board, it's not how you win. You win, by making contact with the opponent and stopping their momentum. I remember from my school playing days we lost the games where we were afraid to make the tackles. The same is true in marketing. There is a scary side to marketing that turns it into a contact sport that most businesses neglect, or actively avoid, hence losing the battle for sales. This part is called customer research. In short: The contact sport part of rugby = a tackle The contact sport part of marketing = customer research Customer research is where you engage with your target market, and it is almost always ugly, dirty, tiring work. Sending out a clean Google Forms questionnaire over email to your 20 most loyal existing customers and politely asking them to r
Read more

- January 23, 2021
What does winning look like in your business? It's a serious question, and too few entrepreneurs know the answer. The answer can't be "making money". That's like a runner saying he wants to run. Running isn't winning; it's participating.  Like this book I'm reading says "Are you playing to play, or playing to win?"  The ultimate definition of winning can't be an internal measure, of any kind—branch growth, employee count, revenue...even profit. These are all participatory numbers, like a speed dial, rev counter and fuel gauge in a car merely says it's moving. But is it ahead of the others?  Winning is about serving customers brilliantly, and either you are doing it successfully, meaning you're winning, or you're not, meaning you survive for another day.  But is making money not a reflection of customer satisfaction, I hear you say. I don't think so. Revenue is a poor indicator of customer perception—it's simply a sign
Read more

- October 20, 2021
In my conversations with company owners, executives and entrepreneurs about marketing, these are the words that they use most:  Social media Website Content Cost Likes Comments Views Data Logo Leads Time Effort This vocabulary reflects a desperate search for results through activities. It corners marketing into the expense column of the income statement and fills any senior manager or owner with dread - "where must I spend my money?". However, after paying careful attention to the way the client describes their requirements, I try and introduce a new set of words: Market share Customer value Brand reputation Objectives Messaging Meaning Effectiveness Efficiency Timelines Budget Resources Results These words shift the conversation from "marketing as the colouring-in department" to "marketing as a growth facilitator". It moves the mindset from expenses to investments, from tactical activities to strategic momentum. I recently bought a house and was amazed at
Read more

Bernard Jansen
Hello to you, and well done for finding this blog! Here I share thoughts that are only partly processed on topics ranging from life in general to politics, business strategy and entrepreneurship. I don't have a fixed schedule for posting, but I try and have an update once a month.